Sonia Garza-Monarchi is a leading expert in the world of protocol, corporate diplomacy, international and cross-cultural relations, and business etiquette. As a trainer, speaker, consultant, and executive coach she brings the power of protocol and diplomacy to the business, government, and nonprofit sectors. With over 30 years’ experience coordinating visits, events, and meetings with international dignitaries, Ms. Garza-Monarchi helps clients succeed in the global arena, meet key objectives, open doors, build relationships, and enhance bottom lines through careful planning, attention to detail, and respect for cultural differences. 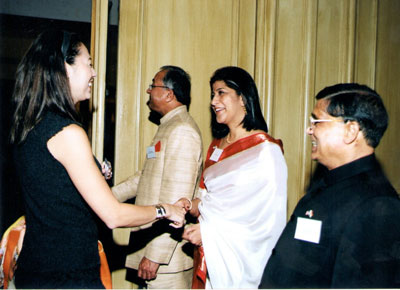 Her firm, Garza Protocol Associates, LLC, has worked with Fortune 500 clients including Marathon Oil and Exxon Mobil, government agencies including the U.S. Air Force and the Houston Airport System, and non- profit organizations like M.D. Anderson Cancer Center, Space Center Houston and the Greater Houston Convention & Visitors Bureau. Ms. Garza-Monarchi creates customized solutions that meet each client’s needs, whether it be coordinating the visit of a chief of state in two weeks’ time; overseeing the protocol aspects of a gala dinner and concert by Placido Domingo for 300 business leaders, ambassadors, and energy ministers; training senior Wal-Mart executives to interact with foreign government officials; or spearheading Houston’s Latin Grammy™ host committee. She is a popular trainer and speaker, known for her engaging and educational presentations as an authority on protocol, etiquette, customer service, event planning, and cross-cultural communication.

Ms. Garza-Monarchi’s exceptional skills in diplomacy, cross-cultural issues, and management brought her to the center of international activities in one of the most diverse cities in the United States. She began her career with the Houston International Protocol Alliance, the city’s office of protocol (now the Houston Office of Protocol and International Affairs) in 1988, and became executive director in 1993. During that time, Houston gained international prestige and saw a 40% increase in consular representation, making its consular corps the fourth largest in the nation. She oversaw thousands of trips to Houston by distinguished visitors – an average of 200 visits a year — including numerous chiefs of state, heads of government, members of royal families, cabinet ministers, ambassadors, and trade delegations. These included visits by Her Majesty Queen Elizabeth II, His Holiness the Dalai Lama, President Jiang Zemin of the People’s Republic of China, and President Putin of the Russian Federation. 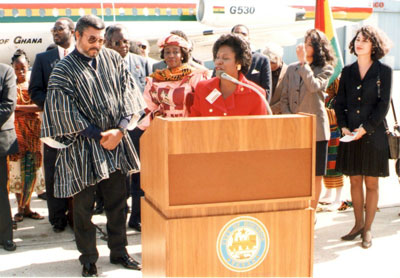 During those years, Ms. Garza-Monarchi provided protocol services and represented the city of Houston on economic development missions to many parts of the globe. She advised four mayors and many city council members on dignitary visits, official foreign travel, national policy issues impacting local business and government, sister city relationships, and relations with the city’s diverse population.

Her keen understanding of local politics was key to keeping the protocol function above the political fray. She developed strong relationships with the U.S. State Department, the U.S. Secret Service, and other government agencies involved in international visits and events. Additionally, she was a leader in the planning and execution of major international events held in Houston, such as the 1990 World Economic Summit, the World Energy Congress, the Corporate Council on Africa Summit, the Houston International Festival, and several national conferences on consular relations and protocol.

Houston’s reputation for skillful handling of consular and protocol matters drew protocol officers from other cities, states, and entities to consult with Ms. Garza-Monarchi on staff training, cultural background research, the development of protocol capabilities and the standardization of protocol procedures. Ms. Garza-Monarchi has also advised a variety of corporations and organizations on protocol and cross-cultural issues, including Coca-Cola, Duke Energy, Saudi Aramco, and the Four Seasons Hotel, and has offered courses on protocol through Rice University’s Continuing Studies Program. Ms. Garza-Monarchi’s success at the Houston International Protocol Alliance, which was at the time a division of the Greater Houston Convention and Visitors Bureau (GHCVB), led to her appointment in 2000 as executive director of the Houston Image Group, the international marketing division of the GHCVB (which later became part of the International Sales and Tourism Department). In that role, she was responsible for overseeing international media outreach efforts including press releases, familiarization trips, and the development of multilingual collateral materials, as well as conducting interviews. In 2001, Ms. Garza-Monarchi was named vice president and general manager of the GHCVB, with oversight for the organization’s 80 employees and a $12 million annual budget. She then applied her skills in protocol to the broader hospitality industry. In 2004, she established Garza Protocol Associates, LLC, a protocol consulting company. Ms. Garza-Monarchi served on the GHCVB’s executive committee for several years. In 2014, she was elected the first woman chair of the board of directors in the 51-year history of the Greater Houston Convention & Visitors Bureau. She served as member of the executive committee of the Greater Houston Partnership. She is a member of the Advisory Board of the Asia Society Texas Center and served on the Mayor’s Advisory Committee on Arts and Culture. In 2017 she was elected to the Board of Trustee of the Museum of Fine Arts Houston. Sonia Garza-Monarchi believes in better business through better understanding. With her help, Garza Protocol’s clients apply key protocol, diplomatic, etiquette, and cross-cultural skills that lead to success in today’s global economy.

Garza Protocol’s mission is to help our clients succeed in the global market by providing practical protocol & business etiquette training, expert visit and event management, and strategies for corporate diplomacy.

Build successful international business relationships. Communicate effectively with people from any culture. Apply the rules of protocol for strategic benefit.